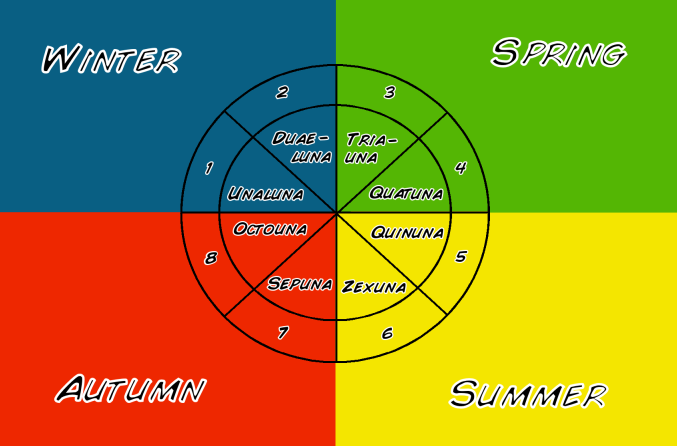 Though there are other traditional calendars used in Ehrdi, every nation in the International Trade Alliance uses the Vetus Calendar as their official one. It was first devised by the Ancients, but fell into disuse around the extinction of the Ancients in 0 AFE. While most of their culture still remains unknown to modern Ehrdians, the Vetus Calendar was rediscovered by the Druden around 1,200 AFE and was brought back into use.

The original Vetus calendar marked the years starting at the foundation of their civilization in -15000 AFE. However, this was modified when the Druden rediscovered it. The new Vetus calendar marked the years beginning when the final Ancients died out, or 0 AFE. The old Vetus dates were converted into - AFE years, or how many years they occurred before the final end of the Ancient race.

The Vetus calendar is a lunisolar calendar, which means it tracks both the solar year and the lunar phase.[1] In Ehrdi, the lunar phases sync up with the solar year and therefore forgo the need for leap years or leap months. Days are counted as the basic unit of time, with one day equaling one full rotation of the planet on its axis. One Ehrdi day is 24 hours long. A year is completed once the planet makes one revolution around its sun. One year is therefore 360 days long. Most parts of the globe experience a four season year, except for those on the equator -- there the climate is warmer, and has a two-season year of dry and wet periods.

The Vetus year is divided into eight months, each 45 days long:

A calendar date is fully specified by the year, the month (identified by name or number), and the day of the month (numbered sequentially starting at 1). The calendar runs through Unaluna 1 to Octouna 45. The origin of the month names comes from Archaic and simply describe the current phase of the moon. For example "Unaluna" means "First moon" while "Zexuna" means "Sixth moon."

In conjunction with the system of months there is a system of weeks. A calendar provides conversion from a given date to the weekday, and shows multiple dates for a given weekday and month.

The week begins with Lunday and ends on Solday, making the length of one week nine days long. There are five weeks in a Vetus month. Different cultures treat different days in various ways: For example, "Letday" is considered a day of bad luck for several Duendai and Datongone tribes, but is met with indifference by the Druden.

Retrieved from "https://ehrdipedia.fandom.com/wiki/Calendar?oldid=4022"
Community content is available under CC-BY-SA unless otherwise noted.